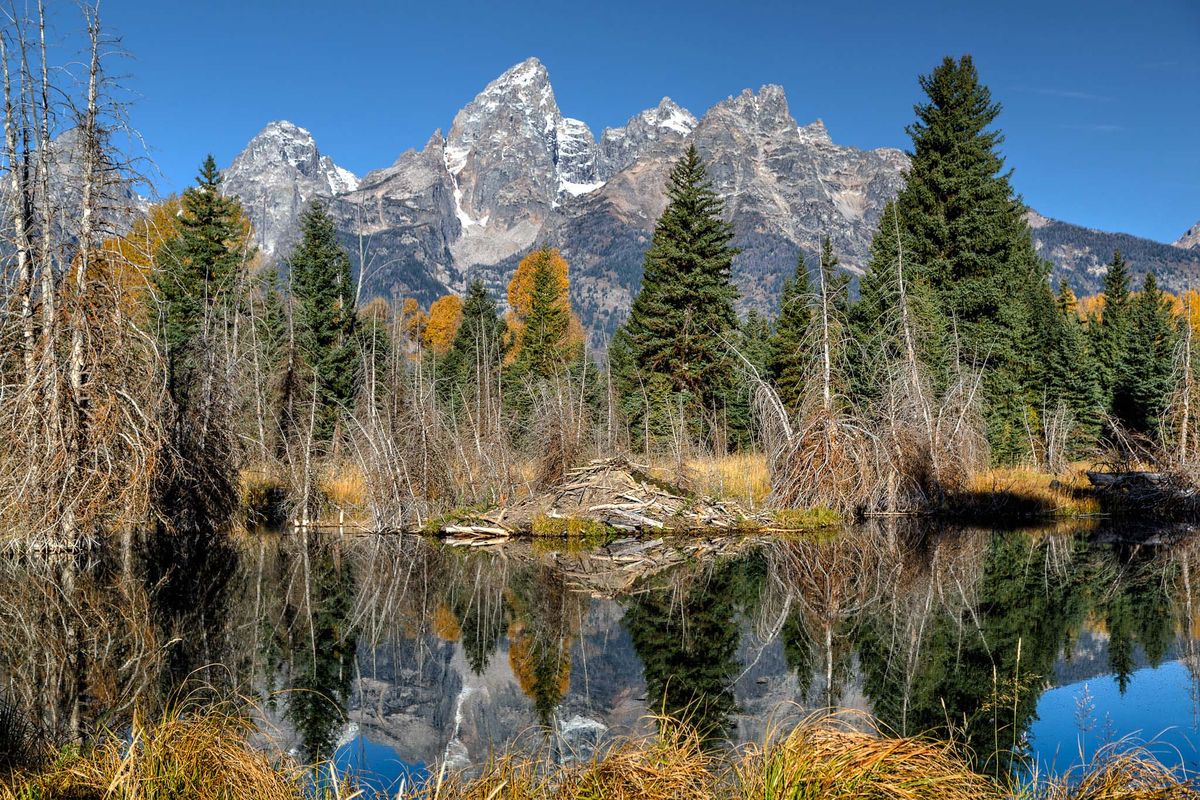 What beavers can teach us about managing water

This article by Christine E. Hatch of UMass Amherst was originally published by The Conversation and has been reproduced here with permission.

As climate change causes extreme storms in some areas and intense drought in others, scientists are finding that beavers’ small-scale natural interventions are valuable. In dry areas, beaver ponds restore moisture to the soil; in wet zones, their dams and ponds can help to slow floodwaters. These ecological services are so useful that land managers are translocating beavers in the U.S. and the United Kingdom to help restore ecosystems and make them more resilient to climate change.

In dry areas, beaver ponds restore moisture to the soil; in wet zones, their dams and ponds can help to slow floodwaters.

Scientists estimate that hundreds of millions of beavers once dammed waterways across the Northern Hemisphere. They were hunted nearly to extinction for their fur in the 18th and 19th centuries in Europe and North America but are making comebacks today in many areas. As a geoscientist specializing in water resources, I think it’s important to understand how helpful beavers can be in the right places and to find ways for humans to coexist with them in developed areas.

Scientists are studying ways to use beavers to mitigate wildfire and drought risks in the western U.S.

Beavers dam streams to create ponds, where they can construct their dome-shaped lodges in the water, keeping predators at a distance. When they create a pond, many other effects follow.

Newly flooded trees die but remain standing as bare “snags” where birds nest. The diverted streams create complicated interwoven channels of slow-moving water, tangled with logs and plants that provide hiding places for fish. The messy complexity behind a beaver dam creates many different kinds of habitats for creatures such as fish, birds, frogs and insects.

Human dams often block fish passage upstream and downstream, even when the dams include fish ladders. But studies have shown that fish have no trouble migrating upstream past beaver dams. One reason may be that the fish can rest in slow pools and cool pond complexes after navigating the tallest parts of the dams.

The slow-moving water behind beaver dams is very effective at trapping sediment, which drops to the bottom of the pond. Studies measuring total organic carbon in active and abandoned beaver meadows suggest that before the 1800s, active and abandoned beaver ponds across North America stored large amounts of carbon in sediment trapped behind them. This finding is relevant today as scientists look for ways to increase carbon storage in forests and other natural ecosystems.

Beavers may persist in one location for decades if they aren’t threatened by bears, cougars or humans, but they will move on if food runs out near their pond. When abandoned beaver dams fail, the ponds drain and gradually become grassy meadows as plants from the surrounding land seed them.

Dried meadows can serve as floodplains for nearby rivers, allowing waters to spill out and provide forage and spawning areas for fish during high flows. Floodplain meadows are valuable habitat for ground-nesting birds and other species that depend on the river.

The value of slowing the flow

As human settlements expand, people often wish to make use of every acre. That typically means that they want either land that is solid and dry enough to farm or waterways they can navigate by boat. To create those conditions, humans remove floating logs from streams and install drains to draw water off of fields and roads as quickly and efficiently as possible.

But covering more and more land surface with barriers that don’t absorb water, such as pavement and rooftops, means that water flows into rivers and streams more quickly. Rainfall from an average storm can produce an intense river flow that erodes the banks and beds of waterways. And as climate change fuels more intense storms in many places, it will amplify this destructive impact.

Vegetation in beaver-dammed river corridors is more fire-resistant than in areas without beavers because it is well watered and lush, so it doesn’t burn as easily.

Some developers limit this kind of damaging flow by using nature-based engineering principles, such as “ponding” water to intercept it and slow it down; spreading flows out more widely to reduce the water’s speed; and designing swales, or sunken spots, that allow water to sink into the ground. Beaver wetlands do all of these things, only better. Research in the United Kingdom has documented that beaver activity can reduce the flow of floodwaters from farmlands by up to 30 percent.

Beaver meadows and wetlands also help cool the ground around and beneath them. Wet soil in these zones contains a lot of organic matter from buried and decayed plants, which holds onto moisture longer than soil formed only from rocks and minerals. In my wetland research, I have found that after a storm, water entering the ground passes through pure mineral sand in hours to days but can remain in soils that are 80 to 90 percent organic matter for as long as a month.

Cool, wet soil also serves as a buffer against wildfires. Recent studies in the western U.S. have found that vegetation in beaver-dammed river corridors is more fire-resistant than in areas without beavers because it is well watered and lush, so it doesn’t burn as easily. As a result, areas near beaver dams provide temporary refuge for wildlife when surrounding areas burn.

The ecological services that beavers provide are most valuable in zones where nobody minds if the landscape changes. But in the densely developed eastern U.S., where I work, it’s hard to find open areas where beaver ponds can spread out without flooding ditches or roads. Beavers also topple expensive landscaped trees and will feed on some cultivated crops, such as corn and soybeans.

Beavers are frequently blamed for flooding in developed areas, even though the real problem often is road design, not beaver dams. In such cases, removing the beavers doesn’t solve the problem.

Culvert guards, fences and other exclusion devices can keep beavers a safe distance from infrastructure and maintain pond heights at a level that won’t flood adjoining areas. Road crossings over streams that are designed to let fish and other aquatic animals through instead of blocking them are beaver-friendly and will be resilient to climate change and extreme precipitation events. If these structures are large enough to let debris pass through, then beavers will build dams upstream instead, which can help catch floodwaters.

A growing body of research shows that setting aside pockets of land for beavers is good for wetland ecosystems, biodiversity and rivers. I believe we can learn from beavers’ water management skills, coexist with them in our landscapes and incorporate their natural engineering in response to weather and precipitation patterns disrupted by climate change.

Shannon Te Huia knew that restoring New Zealand’s Pūniu River would mean restoring the relationship between nature and people, too. Here, he shares some key steps along his journey.
Team members are used to protecting the land – but that has taken on new meaning. The supplies they need now include telescopes and night-vision visors to watch for troops.
Australia’s native species are being driven to extinction – and habitat loss is a major factor. Here’s how one group is working with volunteers to help restore the land.
Conservationist Limbi Blessing Tata had an “overambitious goal” — to rewild five water catchments in her region in Cameroon. With two Miyawaki forests already planted and a third in fundraising mode, you could say she’s halfway there.
For six decades, beavers were unwelcome in Vancouver. Now, they’re taking up residence across the urban core. But can we make this relationship work?
The one-two punch of landscape change and climate change are making matters worse for wolverines. Here's how we can make a difference.
Coyotes have a bad reputation that's entirely undeserved. Here's what really motivates them – and how we can co-exist in peace.
For decades, toxic runoff from abandoned coal mines has left streams and rivers lifeless in West Virginia. Here's how two men decided to reverse the damage taking place in their own backyards.
We can live and even raise livestock successfully in a landscape with jaguars – if we do it right. In 25 years of jaguar-related work, this is what I've learned.
This massive reserve in the Scottish Highlands has numerous rewilding projects on the go. But the cutest and most ferocious residents have to be the Scottish wildcats.