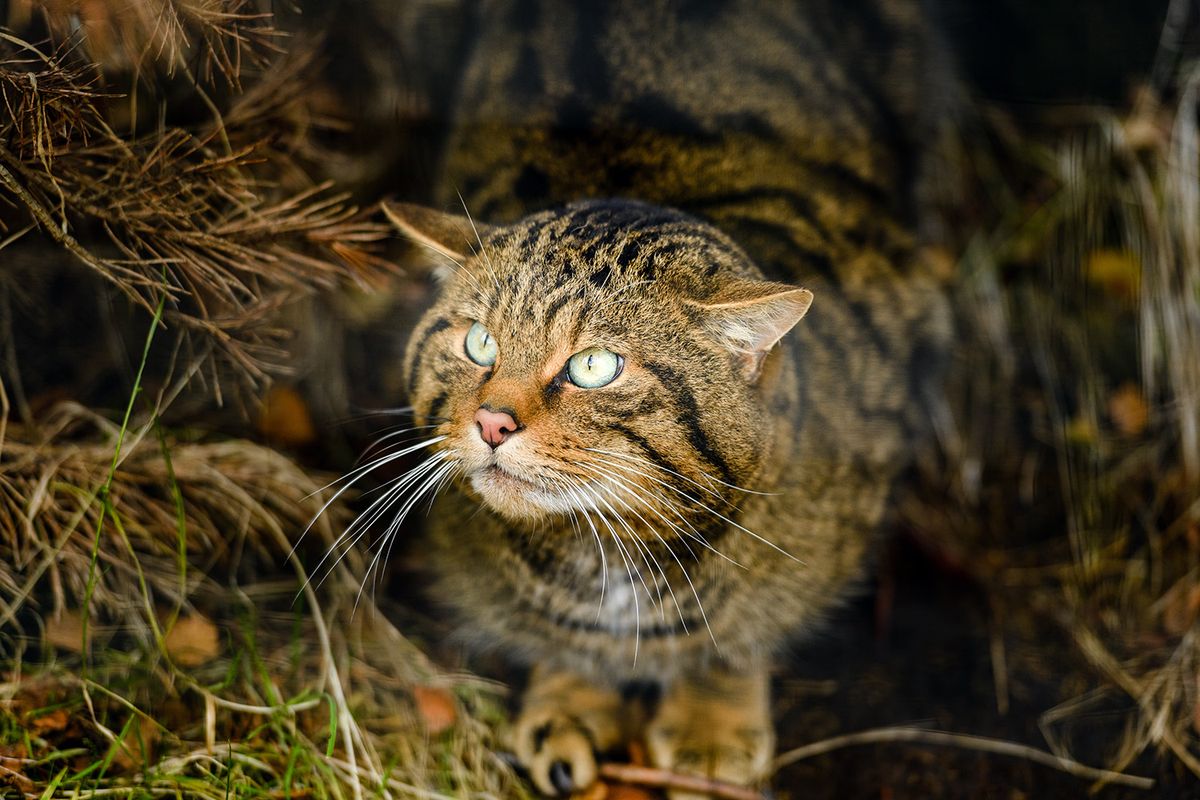 In the far north of Scotland, one hour beyond Inverness, lies Alladale Wilderness Reserve. Acquired by Paul Lister in 2003, the 100-square-kilometre (23,000-acre) estate used to be prime ground for deer stalking and fishing. Now, under the determined auspices of its owner, it is one the premier luxury nature escapes in the world. But this is not a case of greenwashing: Rewilding the great Scottish Highlands is Alladale’s mission. Projects so far include the planting of one million trees, the restoration of peat bogs and the reintroduction of red squirrels to the area. And while Lister’s ultimate dream is to see the return of wolves roaming the land, it is another threatened species that captures the heart of many: the Scottish wildcat.

These furry little predators – Felis silvestris silvestris – were once common across Great Britain. Now, the remaining population is estimated to be between just 100 and 300. In conjunction with the Royal Zoological Society of Scotland and Saving Wildcats, Alladale is part of a breed and release program that aims to bring back the "Highland tiger."

Here, Paul Lister talks about his motivation, the Scottish wildcat program and why, cute as they are, you don’t want to get to close to these kitties.

"Something like 40 years ago, I shot my first deer in Scotland, and I couldn’t quite understand what it was all about, other than to protect tree saplings from them and to ensure that any tree plantations were to be protected. Why do we have to do that? Because there are no carnivores around. We sanitize our landscape.

I'd been to places like Romania and Slovakia and Poland and realized what nature can be like in Europe. So I thought we should do some rewilding in Britain. That came about to me maybe 20 years ago. It was 20 years of thinking about it, and working and being in business, and then ending business and getting involved with rewilding.

If you fly from London to Istanbul, you will fly over nothing but a manifested landscape where we just literally dug, cut and plowed. And you think to yourself, what are the Scottish Highlands being used for? Over 100 years they’ve been more used for sporting pursuits, to serve a Victorian ideal. And also sheep farming. Neither of which, really, increases or improves the biodiversity of the land, or gives much in the way of livelihood to the communities in the area.

Conservation restoration – rewilding – gives opportunity to tourism. That field sport pursuit, in the UK, is vanishing. I'd rather be part of the new growth industry than something that is on its last legs.

Our landscape now is very different from what it was 18 years ago when I bought Alladale. You can see there's clear evidence of lots of restorative work, and more vegetation and less deer running around.

The motivation is simple: It’s having a realization of what things used to be, and what the Romans called the Great Wood of Caldeon. There was a time when there were wolves and bears and Irish elk and lynx and wild boar. And wildcats.

They call it Scottish wildcat, but they’re all over Europe. You can see them quite easily in northern Spain if you go to certain areas such as Cantabria. They're quite visible, and they create a bit of tourism revenue from people who like to go see them. There are two other wild cat species in Europe. One is the Iberian lynx, which is in Portugal, and the other is the Eurasian lynx, which is in the rest of Europe. But the wildcat is the only wild feline left in Britain.

It does what it says on the tin. It’s wild, and it hunts and it's independent.

There's still a few hundred wildcats out there in Scotland. I think they suffered over the years from poachers maybe, and hybridization with domestic cats. They may have five or 10 percent domestic genes in them, but it doesn't matter: They still look bloody wild, and they act wild and they survive in the wild. It does what it says on the tin. It’s wild, and it hunts and it's independent. The wildcat is a shy, secretive animal. If you come across one you'd be very lucky. And it does its job of controlling small animals.

Our involvement is through the breeding program with the Royal Zoological Society of Scotland. We are one of 20-odd captive breeders in the country – probably one of the largest – that breeds cats to then be swapped with other cats. Whilst we’ve been figuring out what to do with the long-term release of them, people have been breeding them and accumulating them and keeping the genetics moving and keeping it all intact. What's happening now is cats are being put into a breeding center in Kincraig that just finished being built; it was a 3-million-euro project.

It's a copy of what they did in southern Spain with the Iberian lynx. There's an area with all these different cells, where different cats are put together and they mate – or they don’t, so they take them out and put other ones in there. It’s a very scientific process of getting as much reproduction out of these cats as possible. If one of the kits is getting bullied, they take it away and foster it. They do all sorts of things. Eventually, the cats that get bred in the wildcat breeding centre will be released into the Cairngorms. That is the first area that’s been earmarked to have cats back. It's a birthplace. And then hopefully Alladale – our glen, our area – will be up the pecking order.

We started our program at Alladale about eight years ago. Our cats came from other collections in the UK. They weren't in the wild; they weren't tame. They were somewhat habituated. Of course, I don't think any wildcat can be tamed. They don’t want to get near you really.

There's seven parts to the enclosure and each one has a netted roof, like a cone. There's vegetation in them, we've got trees growing in them. They’re very well disguised; sometimes you can't even see the cats. We try to make it as chill for them as possible. It's not great having animals behind cages, and it's not my thing. I'm not a zookeeper. But in this case, it's saving species.

We currently have eight cats. The cats we breed end up going on to another centre. And it’s the offspring of those cats that are going to get released.

We just had four kittens. Amazing. I saw them the other day. I'm sure most people who like cats and dogs find them extremely cute. They’re stripey. They’ve got relatively short, stubby tails. They’re like a big tabby cat. When they’re definitely wild is when they hiss and growl. You wouldn’t want to get into a close quarter with one. You wouldn’t want to cuddle one.

Guests at Alladale can go see the program with one of our rangers. We don't sell it as a trip, but we’ll take you there when we're feeding them; you'll see them running between the different corridors of the cages. But we don’t want to be filling the place up with people. It's better the cats are just left alone.

I think guests are coming to us because we don’t hunt, shoot and fish. Because we are considered a green destination. Because we are doing rewilding. All of these things. Once you make the decision not to allow people to come up for shootings and pay for killing things, then the whole market opens up. If 2 to 3 percent of the British people enjoy killing things, well there's 30 times more people who want to just go out and enjoy and look at things. People come to us for a multitude of reasons, and they come for longer now than ever before. We’re fully booked for the next two or three months.

When I gave up the hunting income, people around me said, 'Oh my God, you will never replace that,' and I said, trust me, it's coming back fourfold. And it did. And a hell of a lot more now."

Shannon Te Huia knew that restoring New Zealand’s Pūniu River would mean restoring the relationship between nature and people, too. Here, he shares some key steps along his journey.
Ireland is known as the Emerald Isle, but among all that green is a surprising reality: Native trees are being pushed out, creating ecological dead zones.
Australia’s native species are being driven to extinction – and habitat loss is a major factor. Here’s how one group is working with volunteers to help restore the land.
Conservationist Limbi Blessing Tata had an “overambitious goal” — to rewild five water catchments in her region in Cameroon. With two Miyawaki forests already planted and a third in fundraising mode, you could say she’s halfway there.
Lamech Opiyo believes co-operation is what will save us from the worst of climate change. Good thing he has the power to move people to action with his words.
Deforestation has brought drought and hunger to Zimbabwe’s Marange district. Here’s how one activist is planting food forests to change things for the better.
Some people have a signature dish. Victoria Hillsdon, founder of what just might be Britain’s first dedicated rewilding nursery, has a signature plant.
How do you launch a rewilding project on a small Canadian farm? It takes community support, inspiration from Attenborough — and local gym rats ready for true functional fitness.
Kenya’s Miti Alliance is growing a living seed bank to help counteract deforestation, preserve indigenous tree species and boost knowledge of local ecosystems.
This reforestation project is helping New Zealanders plant native trees across Aotearoa to support biodiversity and the fight against climate change. Here’s how they’re doing it.